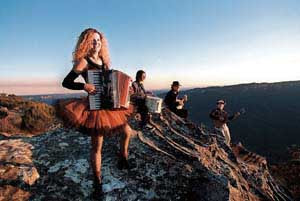 Melanie Williamson is a multi-instrumentalist best know for her work in The Bushwackers.

In 1993 Melanie Williamson was asked to produce tracks on the album 'Tough Country' for Roger Corbett's own band Big Red, achieving a Golden Guitar award nomination for the album's title track and a recording deal for Big Red with Larrikin Records. Mel joined Big Red as a member soon afterwards, a move which segued into Mel joining the line-up for a Bushwackers reunion with Dobe and Roger on the last day of the Tamworth Country Music Festival in January 1994. With Dobe on vocals, Roger on bass and mandolin, and Mel on accordion and guitar, others in this handy line-up included Mark Oats (fiddle), Pete Drummond (drums) and Pete Malone (guitar).

Out in the audience for this 'top-secret' industry showcase gig at the Longyard Hotel was Meryl Gross, former head of ABC Music, and John Bromell, the former head of Warner Chappel Music. Media people happening upon the last show of the festival reported this new line-up as "breathtaking", and the capacity crowd demanding more. Back in Sydney straight after the event, Mel produced a strategic plan and shopped the Bushwackers brand unsuccessfully at first to Sony Music, then struck a new multi-album recording deal with ABC Music, as well as a publishing deal with Warner Chappell. Mel was signed to both deals as band member and manager, along with Dobe and Roger as near-original members. Mark Oats and Pete Drummond were retained as regular members, while the guitarist role would float between Pete Malone and Michael Fix for the first year or so into this newest and most commercial incarnation of the band.

Initial plans were to release a double CD retrospective album but negotiations over the band's lengthy back catalogue with several different record companies would mean months of red tape. It was this delay in contractual negotiations over the long-awaited Bushwackers retrospective collection which gave Melanie Williamson the window of opportunity needed to mount the Bridge of Love Project as a voluntary effort. Dobe, Rog and Mel all featured on the Bridge of Love recording. However, to keep the relaunch of the Bushwackers under wraps for ABC Music while contractual issues were still being finalised, Rog and Mel appeared on the Bridge of Love packaging as 'Big Red', while Dobe - the voice of TV commercials for Target at the time - was credited under his own name.

What followed for the Bushwackers was five hugely successful years under Mel's management beginning with the 2-CD retrospective collection "So Far... The Bushwackers 1974-1994" (ABC/EMI), which she also co-produced. Soon Mel brought one of her rock music mates into the band, legendary guitarist Tim Gaze (Tamam Shud, Ariel, Rose Tattoo), who settled into the line-up. The 1996 live album "Jubilee" (ABC/EMI) celebrated the Bushwackers 25th anniversary with Slim Dusty, Lee Kernaghan, former member Tommy Emmanuel and many other special guests. The 1997 live album "Oz Rock Salute" (ABC/EMI) featured another all-star line-up of guests. "Oz Rock Salute" was launched by Mel featured large on the front page of the Sydney Morning Herald to controversially assert that songs like 'Eagle Rock' and 'Khe Sahn' should be included in the Australian heritage music lexicon, with the timeline for 'heritage' moving forward.

Several EPs and single releases were nominated for Golden Guitar awards, there were national tours and gigs in Canada for RMIT and the Australia Council, major festival appearances at Tamworth, Port Fairy, Emerald, Gympie and Byron Bay, Adelaide Grand Prix, 'Opera in the Outback' with Dame Kiri Te Kanawa and the Adelaide Symphony Orchestra, sell-out shows across the country, frequent spots on TV shows like Good Morning Australia and Midday, a documentary on the band by the ABC's prestigious 'Review' TV program, regular feature articles in Who magazine and other major media, and the official recording of 'Advance Australia Fair' for ABC Music at the written request of former Prime Minister, the Honourable John Howard. The band's sudden rebirth and rise astonished the industry.

By 1997 Mel had obtained sponsorship from Carlton United Breweries (Foster's) for the Bushwackers and the 'Fosters Battle of the Bush Awards' that she'd turned into a sell-out feature event of the Tamworth country music festival each year, as patronised by judges Slim Dusty, Joy McKean and John Williamson. Mel spent the weeks prior to the 1998 Tamworth Country Music Festival working as a shearing-shed roustabout, experiencing the sweat and blood that bush music mythologised, ready to take the band's brand of Australian folklore and musical tradition to more of the world. Roger became unavailable for Carlton-sponsored whistle-stop trips to Europe, Asia and USA for the Bushwackers as ambassadors for Australia and Foster's in the lead-up to the Sydney 2000 Olympics, Roger and Dobe being more focused on developing young songwriters through the CMAA country music college. With grander plans for the Bushwackers stalled indefinitely, Mel relinquished management and co-ownership of the band to teach marketing and study towards a masters degree, eventually returning to mainstream business as a marketing consultant. Mel performed solo occasionally, hosted 10 days of live-on-stage 'Tonight Shows' for the 2005 Tamworth Festival, and produced an alt-TV special on Tamworth in 2006.


Melanie Williamson became something of an icon as the tutu-wearing accordion player in the legendary Bushwackers band during their 1990's resurgence. "I couldn't live down my old band image," she said, "so I put it to good use."